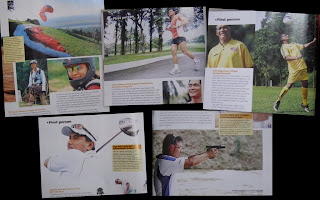 First person, Going Places, October 2009
For this particular gig, I had to interview six outstanding sports personalities from MAS.
Did somebody just say sports?
Yours truly was a classic kaki bangku. Way back in Form Two, my maiden volleyball serve landed on the head of my classmate Pooi Pooi. I don't know if she recovered fully from the trauma, but I certainly never did. Was it any coincidence that I never had many sporting friends?
Naturally, when the time came, I was filled with excitement, curiosity and not a little trepidation.
What could a writer have in common with a bunch of sportspersons?
Mental strength
Since the interview with Foo Kah Hin took place at a shooting range, I had to find out if I was a, ahem, hot shot.
Once I actually had the gun in my grip, I was calm as still water.
"Ready?" Foo asked in a calm, clear voice. "Now pull the trigger. Slowly. Make it a slow, sustained movement."
Bam!
I tottered unsteadily backwards, more surprised by the relatively tame aftermath, than anything else. No shells flew backwards. The gun jerked back only slightly. Did I miss very wide of the target?
We scurried up to the cardboard target.
There was a hole barely an inch away from the centre of the Alpha Zone. "You are a good shot!" Foo declared.
It must have been a fluke. Beginner's luck. I asked for another turn.
Bam. Bam. I was cool and collected all three times, and I was on target all three times.
Foo had said, "In dynamic shooting, mental strength is as important as physical... like other competitive sports, it is important to keep a clear head and think positive thoughts. It is even more critical in an open competition where you face off against teams from varying backgrounds and superior skill sets."
I decided to retire at my peak i.e. after three shots - hey I don't want to blemish my perfect record ok - and spent the rest of the afternoon picking the brains of the boys, who are more than happy to initiate this neophyte into their world: shotgun, handgun, rifle, winchester, holster, magazine, etc.
Character building
Over the phone, John Engkatesoo had alerted me to expect a "fat, old chap with a big tummy" at a football field to do a shoot.
He was obviously being modest, for he was anything BUT fat. In fact, as I told the photographer later, he looks pretty hot for a guy his age. A healthy crop of salt and pepper curls tops a rangy frame which he modestly tries to pass off as 5' 9" when he's "at least a 5' 11'", I tell him accusingly.
John's only response was a toothy grin. It's not hard to see why he had a legion of fans during his heydays.
After the shoot was over, we adjourned to A & W, where he regaled me with vignettes of his action-packed life, from his short-lived but glorious days as an international footballer, to his invariable foray into the corporate world, which was no less exciting. Football didn't just teach him how to kick a ball around - he learnt about dealing with people, and being a team player, all of which came in handy when he eventually assumed his current position.
Needless to say, my root beer float was all but forgotten.
Grace by example
Devan Dinasan is more than an ace road runner or spitting image of Chow Yun Fatt.
We met up for lunch one time after the shoot. It was raining on the day. When he saw me walking out from the exit, he alighted from his car, unfurled an umbrella and started walking towards me.The last time somebody did that was last century.
"Hey I am not puteri lilin ok?" I said in reflex, as he shielded me from the light rain during the short dash into his car. Two seconds later, he floored me again, by opening the car door.
When I thanked him for this random act of chivalry later, he responded, "The umbrella needs to get wet sometimes and the car door ...no big deal ... it was already there, and can be a little heavy to open to those not familiar ."
Now that's what I call true sportsmanship.
To Devan, John, Foo, Yati, Captain Arif and Captain Aziz, I salute you for inspiring even kaki bangkus like me to reach for the impossible.
For showing me that we're not very different from each other. Writer or sportsperson, we're all creatures of passion.
Every time we jump off a cliff, walk into the roaring stadium, brace for that swing, aim for that impossible shot, break into that stride or, in my case, pick up that pen, it's like falling in love all over again.
In the meantime, I do believe I have an open invitation to redeem. Anybody game for a spot of paragliding?
PS Pei Ling, thanks for helping Ms Photoshop Idiot with the collage :)
Posted by Alexandra Wong at 10:38 PM

oof *jumps up and down* me want! Paragliding I mean ;p

Have done your jungle train or not? :)

hi alexandra,
your article on 31 oct in the star mimicks what I've been thinking for the past 3 months. I love to write too but I have other things I can do if I don't work full time. Might take the plunge but there are a few uncertainties..guess that's the same for everything. Maybe I'll risk it.thanks.

Hi. Read your recent article in The Star and liked it. Keep up the good work :) I actually thought your blog name was Bunny Sprints!

Royal Jester: All the best! If it's any consolation, when it's time to go, you'll know it :)

Patchris: Actually, you're half right. I purposely chose a double entendre ... it can be read as Bunny's Prints OR Bunny Sprints - which describes my life quite aptly ;)

Making note to self: do not piss off Alex...

You had a classmate called Poo Poo?

Alexandra Wong is a Malaysian storyteller.
Though her body of work includes reports on travel, trends, food, culture, information technology and personality profiles in over a dozen local and international publications, and editorial content across multiple mediums for various corporations, she is primarily known for, and proudest of, her frank first-person accounts in Navel Gazer, her monthly column for Malaysia's highest-circulation English language daily The Star.
Want to give her a book deal, send her a blank cheque, or talk pop culture over filter coffee?
Write to her at alexandra.lywong@gmail.com and check out her full bio.